6 Secrets Your Parents Won’t Tell You About Their Money

9 Year Mortgage on Things Your Parents Won’t Tell You

Have you ever wondered if your parents are being completely truthful when it comes to their finances? Do they have an old collection that may actually be worth thousands of dollars, or do they act poor but really have stacks of cash stashed away?  Maybe their house is paid for and you have a sizable inheritance coming your way and you don’t even know it. If you have ever wondered about your parents money then read on and 9 Year Mortgage will tell you the 6 things you don’t know about your parents and their money.

Two sons said that their dad loved to collect coins, however they didn’t discover the full truth of his hobby until he passed away. Stored away in boxes in their dad’s home was a sprawling coin collection, including hundreds of Morgan and Peace silver dollars worth anywhere from $30 to $100. The sons had no idea that their dad’s collection was so extensive, and valuable. This is known as a surprise inheritance. 9 Year Mortgage says these kinds of inheritances are becoming more common in the U.S. In a recent U.S. Trust study, 52% of parents with assets of $3 million or more said they haven’t told their children just how wealthy they are, and another 15% haven’t even told them they they’re well off financially at all. Why are parents doing this you may ask? Because they fear that their kids might become lazy or make bad choices in anticipation of a financial windfall. 9 Year Mortgage suggests that most parents incorrectly assume they have plenty of time to talk about money and that the knowledge of wealth will be a burden for their kids. Experts at 9 Year Mortgage also suggest that not telling your children about how much money you have could cause issues when your heirs are getting your fiances in order after you die.

As children we usually expect that our parents are putting us in their will and that we get an inheritance, if there is one to be had. However if your 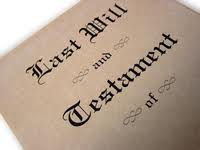 parents haven’t told you what their net worth is, there is a huge chance that they are not planning on giving you any of it. The U.S. Trust study on wealth disclosure found that 49% of respondents don’t think that it’s important to leave a financial inheritance. Instead of giving the children an inheritance, they decide to give their money to charity. Also parents who are angry with a child might cut that child completely out of their will, or have them do a long list of criteria in order to qualify for their share. 9 Year Mortgage wants you to remember that children my be cut out on accident, such as if a divorced or widowed parent remarries, his or her assets automatically go to the surviving spouse unless a trust has been set up for the children. 9 Year Mortgage wants to make sure that you don’t make any major life or money decisions based on the hopes that you will be receiving a big inheritance.

3. “Someone is taking advantage of me.”

As you get older you are targets for all kinds of financial scams, frauds and exploitations. 9 Year Mortgage suggests that the main reasons why the elderly are targeted is because they generally have more money, and they usually have more free time on their hands to engage in risky behaviors like listening to a phone pitch, entering their names in drawings and reading junk mail. Also those that need daily help are more likely to be taken advantage of by their family members as well as their caregivers. Last year, losses from financial abuses against the elderly tallied $2.9 Billion, a 12% increase from 2008, according to the MetLife Mature Market Institute. What’s even worse is that fraud victims age 55 and older are less likely to acknowledge or report the fraud. The AARP Foundation National Victim Fraud Study found that although 37% of older victims admitted they had been scammed, only 25% reported the crime. 9 Year Mortgage thinks that adult children should be aware of their parents finances to some extent, especially if your parents have in-house caregivers. If that’s the case, 9 Year Mortgage suggests you watch your parents financial accounts just like you would watch your own, and red-flag any suspicious transactions. Also adult children can limit the caregivers ability to steal by offering a prepaid debit card for normal everyday expenses such as groceries and medication co-pays, instead of allowing them all access to their check book.

4. “The reason you are bad with money…is because of me.”

Growing up, a young girl always hears her mother complaining that she didn’t have a luxury car or designer clothes. Her mother always told her and her siblings that they needed to make sure that they could buy those kinds of things in life. That same young girl grew up, graduated college, and bought them all by charging her credit cards.  She has now spent years trying to pay them off. Later in life she comes to find out that her mother wasn’t being completely truthful about why they didn’t have those nice things. The young girl eventually saw her parents financial accounts and learned they had a substantial amount of money and no debt. If this girls parents would have been more open about their finances, she could have learned the perils of using credit to buy things. Clearly parents often do a poor job teaching their children about finances. 9 Year Mortgage wishes that parents would sit their children down and have a candid conversation about money. Children often pick up on parents financial actions, however it is usually not clear to them what they should be repeating and what needs to be avoided. If parents don’t do this it could have long-term financial consequences. The 2011 National Foundation for Credit Counseling financial literacy survey found that 42% of Americans picked up their money habits from their parents. However, the funny fact is that 56% of these adults do not have budget, 28% do not pay their bills on time, 32% don’t save for retirement and 33% don’t save at all. Better yet, most of those people would still give themselves an “A” or “B” grade in financial literacy.

5. “You are ruining my retirement…”

According to 9 Year Mortgage, hitting up the “bank of mom and dad” for cash is still very common, even for adult children. Close to 60% of parents are providing some sort of financial support for adult children, according to a recent survey from the National Endowment for Financial Education. Even though most parents are doing this for their adult children very few of them can actually afford the extra expense: 26% have taken on more debt to help their kids, and 7% have delayed retirement. However you will never hear that from them. 9 Year Mortgage says it is hard to to tell your children that you can’t afford to bail them out and not one parent wants to see their children struggle. Even with all of this information parents attitudes may be shifting. In a recent 2011 Country Financial survey found that 46% of Americans say it’s more important to save their own retirement that a child’s college education. That is up from 43% from 2010. With this said, 9 Year Mortgage thinks that it is absolutely necessary for parents and adult children to have a discussion about what is affordable and wh

at isn’t. Make sure your children understand what you can do without putting yourself at too much risk. This might mean offering a loan rather than offering a gift, or asking your child to move back home to offset the cost by buying groceries and gas for the car. 9 Year Mortgage also wants the adult children to think about the consequences of leeching too much on their parents. 9 Year Mortgage also wants the adult children to keep in mind that if your parents are putting themselves at risk to help you financially, they may have to move in with you if they outlive their resources.

It is a real risk that adult children will need to use their savings to help with the care of an aging parent, whether that parent has some financial resources or not. MetLife estimates 17% of men and 28% of women care for aging parents. 9 Year Mortgage suggests that parents should look at their finances as though they will live to be 100-plus years old. When looking at this way, you might be required to buy long-term care insurance to supplement a not-so-great savings. Don’t forget to consider any benefits earned from employers and the government, like social security and 401(k) plans. 9 Year Mortgage also thinks its best that adult children ask their parents about their retirement plans and the chances of them needing help, by doing this there will be no surprises and they can start saving sooner rather than later.

9 Year Mortgage suggests that adult children start talking to there parents about what is going to come in the future. This way you will know exactly what to expect when their retirement comes and what you will be inheriting at their demise, if you will be inheriting anything at all. For adult children who are still financially dependent, make sure that your parents are not hurting themselves by helping you and if they are, then start figuring out how you can stop relying on your parents so much and start being more independent. 9 Year Mortgage also suggests that you talk about retirement and that you take a close look at your finances and see if you are going to have to help supporting your parents. If so start a savings now, so that when the time comes you are already prepared.

Thanks for another great article. The good news is I have a great relationship with my parents, the bad news is I don’t think there will be any sizable inheritance coming my way. I’m not concerned though, there is more to life than money!